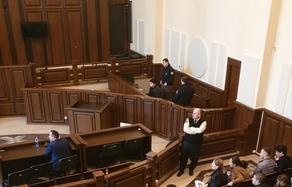 When I become a lawyer, I will follow up with my plan of pursuing this case further, Mikheil Kalandia accused of being involved in group murder of Davit Saralidze on Khorava street declared.

Kalandia offered his condolences to the late teenager's family and said that nobody planned to kill anybody at the crime scene.

"Nobody has arrived at the scene with the intention of murdering a person. I was a high school senior and went there with my schoolbag. We had found our common acquaintance and agreed to reconcile. The existing situation there did not push anybody to think about wounding anyone. Unfortunately, Davit Saralidze exacerbated the situation: after the loo incident, he asked the wrong questions, and, by doing so, he fueled the conflict between Giorgi Janashia and him. I was there to help Giorgi Janashia. Janashia warned me, and I attempted to keep Saralidze away from him, but I did not use any object to do so. I wanted him to leave Janashia alone and focus on me, but I failed. This incident is lodged in my memory for good. I will always remember this incident which stained my life," Mikheil Kalandia said.

In the accused's words, he is innocent, and the evidence obtained by the prosecution is false.

"The MIA exerted all-out efforts to collect false evidence. I have no idea in whose interests this is; however, I am ready to go to prison. I have one aim only: to unearth the truth," Kalandia said, adding that how you see yourself is the only thing that matters.

On December 1st of 2017, on Vera district, two minors -- Davit Saralidze and Levan Dadunashvili were fatally wounded, with one of them dying before being transferred to a hospital, and the other passing at the hospital the following day.

Mikheil Kalandia was detained on June 4th of 2019 and charged with group murder of Davit Saralidze under aggravating circumstances. On June 6th, he was sent to prison.