Mikheil Saakashvili: You are the same court as I am an astronaut 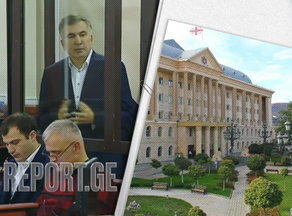 "You are as much a court as I am an astronaut," Mikheil Saakashvili, Georgia's third president, told Judge Nino Chakhnashvili after she called on the accused to look at her while talking, not to the public in the courtroom.

"I appeal to the Georgian people. I am not going to look Ivanishvili's court in the eyes. I know very well where I am - I built this hall; I made the flag behind you; This chair you are sitting on was put by me; This auditorium was made by me, as well as this cage. Everything that is done in the country and that has not been spoiled so far was made by me. Unlike you, I have graduated from four law schools. I do not respect Ivanishvili's court," Saakashvili told the judge.