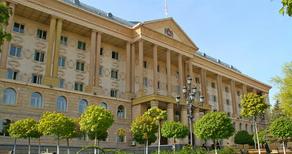 Vital Griva has been sentenced to 14 years' imprisonment for murdering his physically challenged victim. The verdict was unanimously rendered by the jury members, with the judge refusing to approve the motion by the defendant's lawyer.

According to the Prosecutor, late Giorgi Iordanashvili had his leg amputated due to gangrene in 2018, and after this, he tried to find solace in alcoholic drinks.

Mr. Iordanashvili was murdered on 4 February 2019 in Ponichala; the victim sustained 25 wounds in his face and chest. Vital Griva was accused of murdering him and detained.

The investigation into the case is in progress under part 2 of article 109(b) envisaging crimes of murdering people with physical disabilities, with criminals being sentenced to 13-17 years' imprisonment.