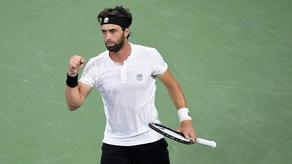 Tbilisi City Court, under the defender’s mediation, admitted Nikoloz Basilashvili, arrested with the accusation of violence against his ex-wife, for 100,000 GEL bail.

Nikoloz Basilashvili’s defender, Irma Chkadua, says the Basilashvili will be released in the nearest period. According to her, the accused does not recognize the guilt.

“He does not recognize the accusation because he had not committed it, and there is no evidence against him; he is admitted,”- said Chkadua.

According to the case prosecutor, Basilashvili is bailed to pay within 30 days. He also says that the process continues, and there is a next court session scheduled for July 16. The prosecutor does not talk about the evidence.

Reminder: the world 27th top seed, Nikoloz Basilashvili, is accused of beating his former wife in the presence of their minor child and was arrested with the accusation of violence against his former wife.