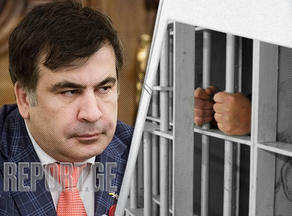 The Special Penitentiary Service refused to take Mikheil Saakashvili to court again. According to a statement issued by the agency, according to the information requested by the Special Penitentiary Service from the State Security Service and based on the information received from the agency, the appearance of convict Mikheil Saakashvili in the courtroom due to his security issues is associated with certain risks.

As the agency explains, the convicted Saakashvili has stopped the essential part of his treatment, due to which taking him out and attending the trial poses an additional risk to his health.

"It became known that it was planned to block the access roads to M. Saakashvili's penitentiary by means of vehicles owned by representatives of a number of political parties.

Such actions may also occur in the case of his escort in the courtroom.

The appearance of convicted M. Saakashvili in the courtroom is associated with certain risks due to his security issues.

If the relevant decision is made, the Special Penitentiary Service will ensure the remote participation of the accused/convicted M. Saakashvili in the court session," the statement reads.

The trial on the case of embezzlement of funds will be held in the Tbilisi City Court today at 11:00.