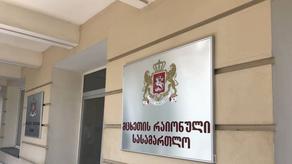 A pretrial session over late footballer Giorgi Shakarashvili's case will be convened on 27 August at 12:00 pm. The date was fixed at today's session.

Lawyers say that the scheduled date is unreasonable since five days prior the trial, the parties must exchange evidence, and in accordance with this decision, the lawyers have left nearly nine days to obtain evidence.

At today's court trial, Archil Gagnidze protested against the involvement of a public defender who represented him and wanted to have the defendant recuse himself; however, the demand was dismissed.

Prosecutor Davit Kazarashvili says that on 27 August, they will discuss whether the evidence is acceptable; however, at this point, he is not allowed to release more information on the existing evidence in the case.

The prosecutor says that if the evidence is strong enough to press charges against the sixth passenger of the Toyota Camry vehicle, the corresponding decision on this issue will be made.

Georgia's General Prosecutor's Office instituted legal proceedings against the individuals accused of murdering Giorgi Shakarashvili, who are now facing deliberate homicide charges. Investigators learned that severely beaten footballer was thrown in the Aragvi river, in which he eventually died of asphyxia.