Prosecutor's office clarified the charges against Melashvili and Ilychova 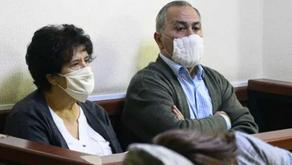 The prosecutor's office clarified the charges against Iveri Melashvili and Natalia Ilychova in the cartographers' case. As prosecutors told reporters, the motivation of the accused had been clarified.

In particular, the prosecution alleges that Melashvili and Ilychova acted following the instructions.

"The prosecution was able to obtain evidence proving that the defendants acted against the interests of Georgia and acted following the instructions given to them," said Prosecutor Giorgi Mujiri.

Giorgi Mujiri did not specify from whom the defendants received their orders, because according to him, a case is being investigated.

According to Iveri Melashvili's lawyer, Eduard Marikashvili, he does not know what the prosecution means when talking about the assignments of "superiors."

As he explains, there is no reference to the identities of the superiors.

"Today, two words were added to the specified accusation - on the instructions of someone else. It is as if the actions of the accused have been carried out on the instructions of someone else. By whose order, what evidence? We have no other evidence at this stage; no additional evidence has been presented in prison. Iveri Melashvili disagrees with the accusation; this is unacceptable for him. We have not had any evidence in the case before, and there will not be anything that will confirm the accusation and prove any connection with these people," Marikashvili stated.

On October 7, the Prosecutor's Office arrested Iveri Melashvili, the Head of the Service of Georgian State Border Delimitation, Demarcation, and Border Relations of the Department of Neighboring Countries of the Ministry of Foreign Affairs of Georgia, and Natalia Ilichova, the Chief Inspector of the Land Border Defense Department of the Border Police of the Ministry of Internal Affairs of Georgia.