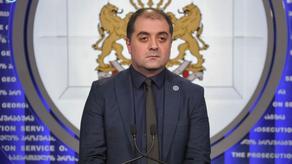 The General Prosecutor's Office of Georgia has completed the investigation into the case of Davit Gareji. Prosecutor Amiran Guluashvili stated about it at the briefing.

As Guluashvili noted, the case will be heard in Tbilisi City Court from now on.

"The Prosecutor General's Office of Georgia has completed the investigation into the transfer of part of Georgia's territory to a foreign country against the accused Iveri Melashvili and Natalia Ilychova, and the case will be heard in the Tbilisi City Court. Hundreds of investigative and procedural actions have been taken in the criminal investigation case. Up to 100 persons were interviewed as witnesses, important documents, including cartographic material, were seized from various state agencies.

The original topographic map of 1937-1938, with 1/200 000 scales as a result of investigative actions, was found in the office of Natalia Ilyichova. It should be noted that the map is state property and instead of the accused's office, according to the Georgian legislation, should have been kept in the archives of the National Agency of Public Registry of the Ministry of Justice," Guluashvili said.