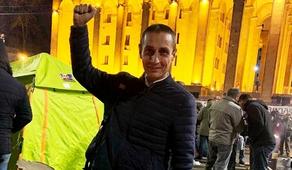 Lasha Chkhartishvili having been detained at the protest rally outside the National Library has reportedly been sentenced to 8 days in prison.

The defendant's lawyer Ia Siranishvili disagrees to this decision and plans to appeal against it. As per the lawyer, the defendant did not resist law enforcers, and law enforcers themselves applied violence.

The defendant himself could not attend the trial since he was requested to leave the previous session and imposed GEL 300 bail bond by the judge.

Labour Party member was detained outside the National Library today. He has faced the charges of petty hooliganism and failure to obey a police order.

Protesters were gathered outside the National Library building for 2 hours and waited for Minister Tea Tsulukiani, when she was attending the event dedicated to the 30th anniversary of of the Convention on the Rights of the Child (CRC).

Before leaving the library, Tsulukiani remarked that the opposition would be better off preparing for the elections.