Public Defender: The case of the cartographers obviously has a political or other motive 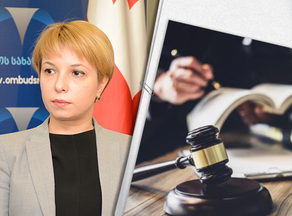 The Public Defender appealed to the Tbilisi City Court in the cartographers' case with the friendly opinion on February 25, 2020. The submitted document is based on the study of 14 volumes of case materials, including studies of the covert investigative actions.

According to the ombudsman's office, in parallel with the study of the investigation materials, the Public Defender held meetings with both the prosecution and the defense.

The Public Defender notes that the case of the cartographers does not prove that the accused wanted to transfer the territory of Georgia to a foreign state or acted with this intention.

"Public Defender reviewed the signs of the crime under Article 308 of the Criminal Code in the actions of the accused. In our estimation, the evidence in the case does not prove that the accused wanted to transfer part of the territory of Georgia to a foreign state or acted with this intention. The information provided by the defendants during the interrogation as witnesses got confirmed by the documents of the covert investigative actions. The evidence obtained also did not prove any trace of corruption, fraud, embezzlement, or any other element of malicious intent on the part of the accused in their activities as experts," the ombudsman's office said.

The ombudsman draws attention to possible political motives and notes that the cartographers' became a major pre-election political issue and was used for agitation purposes.

"The launch of the investigation into this case coincided with the parliamentary elections, became the main pre-election political issue under consideration, and was also used for agitation purposes. The document cites statements made by senior officials of the ruling political party, members of the political council and government, deputies, and others during the pre-election period. They used the accusations of Melashvili and Ilyichova to criticize political parties. In our estimation, the present case clearly has political or other motives that outweigh the legal motive in the case. According to the case law of the European Court of Human Rights, it is considered a violation of Article 18 of the European Convention.

We hope that the Tbilisi City Court will properly and in detail discuss the elements of the crime and the circumstances of the political motive, and will provide a substantiated argument on the issues under consideration," the Public Defender's Office said in a statement.