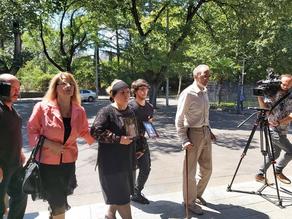 Tamar Bachaliashvili's family members and a lawyer are at the General Prosecutor's Office.

As Mikheil Ramishvili said before the meeting with the Prosecutor General, he has a lot of questions about the case and hopes that the meeting will not end in a few minutes.

"I will not specify the requirements. First of all, Tamar Bachaliashvili's mother, Teona Tamazashvili, will ask why the prosecutor asked unethical questions about the journalist and me. I am defending the interests of the victim. This environment and background are psychologically unacceptable. I will have more business-like questions with Irakli Shotadze and demand the case's materials," Ramishvili said.

According to Teona Tamazashvili, during her stay at the Ministry of Internal Affairs, prosecutor Maia Gogoreliani bullied her. The prosecutor was interested in how one of the journalists got the letter, which may belong to Tamar Bachaliashvili. The investigator was also interested in the amount of money the family pays to lawyer Mikheil Ramishvili, and how and why he got involved in this case.

According to Tamazashvili, she will have questions with the Prosecutor General regarding this.