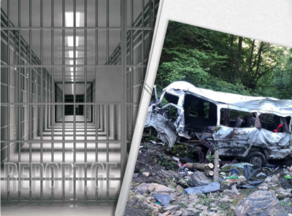 The final court hearing in the case of the Shatili tragedy, which claimed the lives of 17 people, was held today.

The court found Shalva Bolotashvili, the head of the travel company traveler.ge, guilty and sentenced him to 3 years in prison.

Gocha Gogilashvili, the owner of a minibus, was sentenced to 7 years in prison.

According to the lawyer of one of the victims, Dimitri Nozadze, the family is dissatisfied with the verdict because Shalva Bolotashvili was suddenly re-qualified. Both he and Gocha Gogilashvili were initially charged under Article 276, which stipulates violation of traffic safety or operation rules. The head of the traveler.ge received a relatively light article and was found guilty of official indifference.

According to the lawyer, the family is going to appeal to the prosecutor's office.

A car accident took place on August 23, 2020, in Dusheti Municipality, near the village of Biso, on Shatili Road. The passenger minibus fell from a height of about 80 meters on a rocky slope. Seventeen people died on the spot, and three were seriously injured. Two of the three injured died later.