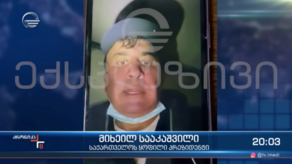 The State Inspector's Service of Georgia has started studying the lawfulness of publicizing and allowing the masses to access video footage by ex-president Mikheil Saakashvili.

The statement by the State Inspector's Service says that a media outlet has publicized the video footage showing Mikheil Saakashvili.

According to released information, the Prosecutor's Service of Georgia confirmed that the video footage disseminated to the public via social media networks constitutes criminal case material.

''The harmful practice of releasing criminal materials by different media outlets and spreading them on different internet platforms was discussed in the 2020 report by the State Inspector's Service, submitted to the parliament. The State Inspector's Service has studied a number of instances of criminal and administrative cases (witness questioning materials, forensic examination opinions, court decisions, medical documents, video footage, and others), together with personal details of the corresponding parties being publicized,'' the statement reads, adding that similar practices must be prevented.

Earlier, the Imedi TV Company has released the video footage showing ex-president Mikheil Saakashvili heading from Ukraine to Georgia in a trailer. In the footage, he talks about possible scenarios of his abduction.