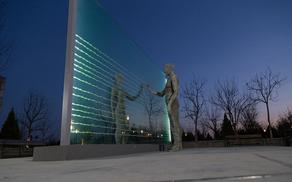 The Ministry of Internal Affairs has launched an investigation after the Memorial to Victims of Occupation was vandalized in Tbilisi.

The investigation is in progress under Article 187 of the Criminal Code of Georgia (acts of vandalism).

The act of vandalism was reportedly committed in the evening. Law enforcement officers are now working on the scene.

The Memorial was put up at Tbilisi Mayor Kakha Kaladze's initiative in January of 2021.