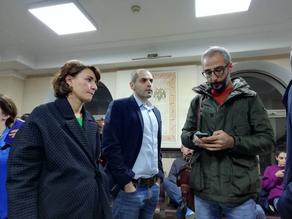 In order to express their solidarity with the detained activists, representatives of different NGOs have arrived in the City Court, which is now discussing the detainees' case.

"Transparency International is expressing its solidarity with the detainees and is providing them with legal assistance. People's indignation is totally understandable since the ruling party has hampered the country's democratic development by rejecting the proportional system. Nothing can be said in advance, but I hope the case verdict won't be politically motivated," declared Eka Gigauri.

The case of the detained activists in being discussed by the court now.