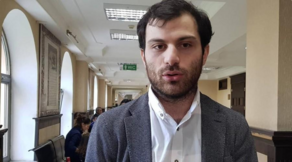 "Posting the bail is not under discussion, as Nika Melia has already firmly stated that he does not intend to pay it," UNM head Nika Melia's lawyer said.

In Basilaia's words, the authorities are seeking ways to release Nika Melia and save their face.

"The court trial, in fact, demonstrated the absence of any basis for keeping Nika Melia in custody.

At the prosecutor's briefing, we heard that the reason for putting Nika Melia behind bars is that he refused to post the bail and not the necessity to perform the tasks under the Criminal Code of Georgia or the possibility of him fleeing the country. We do understand the seriousness of the situation in which the government is now, and we know they are trying to save their face," Basilia said.

Prosecutor Amiran Guluashvili has held the briefing, at which he stressed that the motion for the UNM head's release would be filed if he paid the bail.

Nika Melia was arrested at the UNM office on 23 February.