Vakhtang Gomelauri: Investigation on Bachaliashvili's case will be completed soon 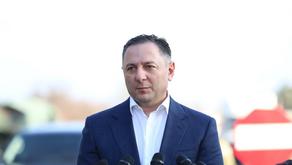 "I cannot speak openly about Bachaliashvili's case. The investigation is ongoing, and I think it will end soon," the Minister of Internal Affairs of Georgia Vakhtang Gomelauri told journalists during his visit to Shindisi.

As for FBI experts' involvement in the case, the Minister says that if necessary, the FBI will be involved in the process.

"If there is a need for them to get involved, they will probably in the direction of expertise. Investigators are still working on it," the Minister said.

A 23-year-old Tamar Bachaliashvili, who disappeared from Ponichali, was found dead in her car in Tetritskaro on July 22, 4 days later. The case is being investigated under the articles of illegal deprivation of liberty and leading individual to suicide. The family is seeking the involvement of the FBI in the investigation.