Verdict in the case of Badri Japaridze, Mamuka Khazaradze and Avtandil Tsereteli known 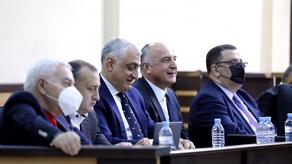 The court found Mamuka Khazaradze, Badri Japaridze, and Avtandil Tsereteli guilty of the so-called money laundering and sentenced them to 7 years in prison, but released them from criminal liability due to the statute of limitations.

According to the judge's decision, the article against Khazaradze and Japaridze was reclassified, and they were granted bail.