A human being needs two kinds of photo: for passport and gravestone - Guram Tsibakhashvili 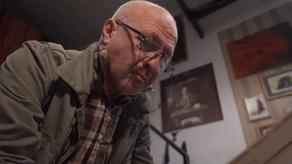 The latest project by photographer Guram Tsibakhashvili is based on the aesthetics of the cemetery. The idea came to him after he read "Cemetery Stories" by Grigory Chkhartishvili.

The project is in an active phase. Tsibakhashvili's text will feature a series of photographs taken in cemeteries in Georgia.

Guram Tsibakhashvili has the most extensive photo archive of Georgia in the 90s.

The photos captured on the film became an essential historical document of Georgia at that time.

In the 1990s, Tsibakhashvili participated in conceptual exhibitions in the On the Tenth Floor Association with famous artists - Karlo Kacharava, Niko Tsetskhladze, Oleg Timchenko, and others.

"Thirty years passed, and these people became famous. It turns out that many things that were lost survived only in photos."