Goga Barbakadze: "I said to myself - if you start, you will start, if not, it will end" 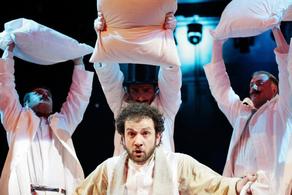 "I told myself - if you start, you will start; if not, it will end. I started, and it continues to this day..." this is how Goga Barbakadze recalls the first play he did at the Rustaveli Theater. It all started in the 90s when the future actor's grandmother brought him to "Berikebi". Later, Goga Barbakadze's creative path continued on the stage of Rustaveli Theater. The public is familiar with him playing the comic character, but the tragic roles he plays in the theater compensate the comedy part. In the video prepared by Report.ge you will get to know Goga Barbakadze more and hear exciting stories about different stages of his life.