Lasha Nozadze: You can not get bored, thirst does not end 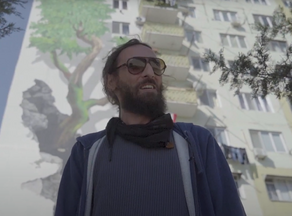 Lasha Nozadze was first introduced to society in 2007 with the song "Freedom for You." As he says, this was the first "patriotic move." In 2008, with his participation, the first Georgian reggae band, "Reggaeon," got established in Rustavi.

The music created by the synthesis of reggae and Georgian folklore is the best expression of his thoughts and words.

"This is a condition that cannot bore you; thirst does not end," said Nozadze.

He is a director by profession. His performances have been staged at Rustavi and Bolnisi theaters. In addition to various charitable activities, he is actively involved in the life of the city of Rustavi.

He founded the "Green Movement" to eliminate the problems of air pollution and landscaping.