Merab Piranishvili: "I think, they are talking to each other ..." 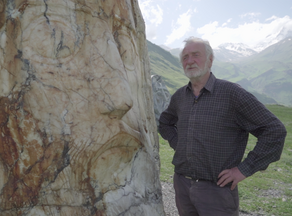 On the way to Kazbegi, in the village of Sno, you will meet the largest boulders at the foot of the mountain. Those who come close, as their sculptor says, will see the "faces of the true patriots who saved Georgia."

"When you stand between them, it seems like you hear them talking, then you believe that they are talking to each other," says sculptor Merab Piranishvili.

Various people help him bring stone boulders from Dariali gorge; he worries about one thing, I lose a lot of time because I do not have enough money to get the stones out faster. He thinks that he should never do what others have already managed. The meaning of his life is the search for something new.

Merab Piranishvili is now working on a sculpture of Mikha Khelashvili, a 25-year-old "member of the Shefitsuli" who was killed by the Soviet regime and said he would do many more sculptures.