Mufti of Georgia: We must accept people with their values 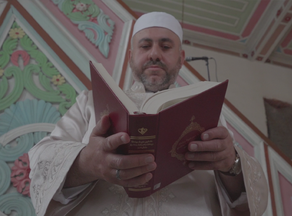 "The mosque is the house of Allah, where we should pray for our families, for the country, and for world peace," says Mufti of All Georgia Adam Shantadze.

According to him, a person should believe where he sees the truth.

"All religions call for kindness, love, mutual respect and tolerance, as does Islam. Our country, from ancient times, has been multi-confessional and multi-ethnic, for centuries, people of different nationalities and denominations have lived together and contributed to the creation of a united and strong state.

We must honor all people who are born of God with our faith and accept their values as they are," said Adam Shantadze during the interview with report.ge.

The Mufti of All Georgia, Adam Shantadze hosted report.ge in the Batumi Mosque, which is one of the oldest buildings in the city, it operated continuously from 1866-1935. It was closed in 1935 and was mainly used as a military warehouse. The mosque was rebuilt in 1946 and it still functions today.