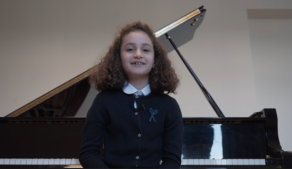 She started studying how to play the piano two years ago, now she is seven years old and performs the most difficult works of classical composers, Chopin, Prokofiev, and Debussy. According to her teachers, Cecil Sivsivadze is a little wunderkind who has a wonderful career ahead. During the pandemic, when she could not perform in front of a broad audience, Cecil became the first and second place winner in 5 international online competitions. She won first, and second-degree awards at the Odin International Festival in Warsaw, and Europe won a gold medal in the United States with Chopin's 14th etude and won two nominations at the Canada Festival. She is invited to gala concerts in Washington and Toronto, where the little virtuoso will play live in front of the audience.