Tbilisi taxi driver: I listen to music, I am tired of politics 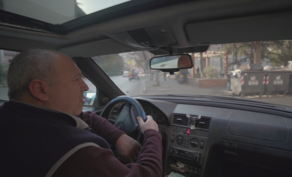 Dimitri Nikolaishvili is a taxi driver from Tbilisi. He says we could laugh about it, but he really has more than two diplomas.

Mr. Dimitri drives the streets of Tbilisi from morning till night and, according to him, meets people of different juries and opinions.

As he recalls, in 1982, he fulfilled his childhood dream and boarded a ship. The young sailor has traveled to many countries around the world. After sailing, he arrived in Tbilisi and became a specialist in metal welding. However, then he had to change profession. Today Dimitri Nikolaishvili is a taxi driver. His work begins at dawn. He says that none of the days are alike; only his passengers' conversation topics are unchanged: politics, sports, and weather.

"I listen to music; I am tired of politics," said the 58-year-old taxi driver from Tbilisi, who thinks that all professions are interesting and necessary; the main thing is that you like it.