Today is the International Day of Sloth - VIDEO 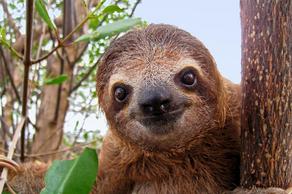 Anybody has the right to be lazy today as the world is celebrating the International Day of Sloth.

This animal is the slowest of mammalians.It can chew one leaf during the whole day.Though it’s day is unusually short.According to the National Geographic, it sleeps 15-20 hours a day and even when it is not sleeping it is not distinguished for its activeness.Due to specifically slow metabolism the animal’s body is directed to radical saving of energy. It lives in the trees of South American woods; eats fruit, grass and leafs.It sleeps, awakes, propagates, copulates and gives birth hanging on a branch.

A newborn two-toed sloth spends its first 4 months adjoined to mother’s belly, and even in later periods it does not go too far.

Some species of this animal are capable to turn their heads 360° around.According to scientists’ information there were the species of Linneaus's two-toed sloth which reached the sizes of elephants though such species no longer exist.

Psychologists say that observing these animals stirs up the feelings of harmony and peace in humans.