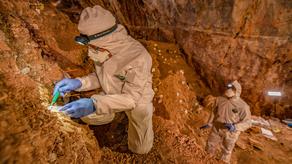 The dirt scattered across the floor of an ancient, remote cave in Mexico has yielded a new source of viable ancient DNA.

For the first time, scientists have sequenced ancient DNA from soil samples - and it's all thanks to the Upper Paleolithic bears that prolifically used the cave as their toilet around 16,000 years ago.

The scientists describe their work as "the Moon landing of genomics", as the breakthrough means fossilized remains are no longer the only way of obtaining ancient DNA. Further, it shows ancient DNA can now be studied in the context of populations, rather than scattered, fragmentary individuals.

Bones and traces of DNA also revealed the presence of a range of animals, including bears, bats, voles, rodents, and kangaroo rats. Using those samples, Willerslev and his team have now sequenced and recreated in full the genomes of two Upper Paleolithic bears.

The first specimen was the ancestor of the modern American black bear (Ursus americanus), which still roams the forests of the North American continent. The second was the now-extinct giant short-faced bear (Arctodus simus), one of the largest bears that ever lived, which died off at the end of the last ice age about 11,000 years ago.