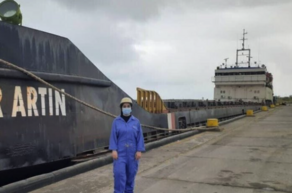 Sadeghi Monfared graduated from the University of Marine Sciences and Technologies in the southern Iranian city of Khorramshahr. She is 22 years old.

"Gender cannot be a barrier to reaching one's objectives, and by entering this field, I aimed to break the taboo so that jobs would no longer be gender-oriented," said Sadeghi Monfared.

Sadeghi hopes that despite the difficulties, she will be able to make progress and become the captain of the ship one day.