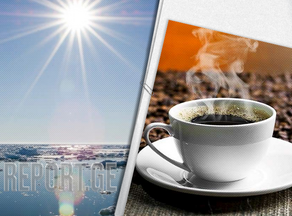 Coffee could become more bland tasting in the future as rising temperatures due to climate change could result in less intense varieties of beans, scientists have warned.

A team from the Potsdam Institute for Climate Impact Research (PIK) created computer simulations to examine the effects of 'climatic' factors on coffee growing areas in Ethiopia, the largest producer in Africa.

They found that changes in temperature, rainfall and length of seasons could quality and rich tasting beans more scarce, but bland beans more plentiful.

As growers make more out of the higher grade versions than the everyday varieties, they may have to make ordinary coffee more expensive to cope with the change.

Climate change experts modelled 19 'climatic' factors on the growing areas in Ethiopia, said to be responsible for some of the finest quality beans in the world.

Warmer temperatures and lower rainfall, for instance, means that the beans which develop into some of the highest grade coffee mature too early.

This means that coffee be used for more everyday varieties that go to make generic lattes, cappuccinos and espressos.

That, in turn, will make the more exclusive varieties rarer and more expensive and, like the finest vintage wines, out of reach to ordinary consumers, they said.

Growers will then create larger areas to grow the more ordinary types and smaller areas for speciality coffee which will also affect their income as they earn more from the posher versions, said the study's lead author Abel Chemura.

He said: 'Climate change has conflicting impacts on coffee production in Ethiopia. The area that is suitable for average quality coffee might actually increase gradually until the 2090s, according to our computer simulations.

'Yet more is not necessarily better. Because on the flipside, the suitable area for high quality specialty coffee types which are valued for their floral, fruity and spicy notes, will likely shrink if climate change continues unchecked.

'This is an issue not just for coffee lovers, but for local agricultural value creation.'

Increased rainfall, on the other hand, favours coffee production in general but may be not necessarily beneficial for individual specialty coffee types.

Thus, while the researchers project that the area suitable for four out of five specialty coffee types will decline, some are hit harder than others.

For example, the Yirgacheffe type, cultivated in Ethiopia's southwest could lose more than 40 per cent of its suitable area by the end of the 21st century.

This is considered one of the world's oldest and sought after coffees by true caffeine lovers, baristas and coffee aficionados the world over.

This would not only affect coffee drinkers worldwide, especially those who grind their own beans or prefer sophisticated blends - it would also have consequences for Ethiopia's economy.