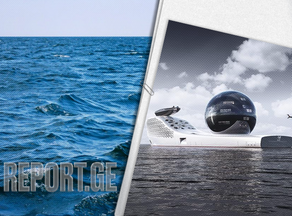 Scientists are working to create a unique nuclear-powered research vessel that will be ready by 2025. The ship, equipped with Silicon Valley technology, will be a floating laboratory. The ship will explore the seas and oceans and conduct global experiments, Daily Mail reports.

The ship project was presented by the international design studio Iddes Yachts. According to the project, its length will be 300 meters, which exceeds the length of the Titanic (269 meters), and onboard it will be possible to receive 400 researchers who will work in 22 ultra-modern laboratories.

The name of the ship is "Earth 300", which will have 160 scientists, 20 residents, 20 students, 40 VIP guests, and 165 crew members on the board. The ship will also have an exclusive, giant black sphere will be installed on the back, where ocean research laboratories are planned to be located.

Scientists will also have a fleet of submarines to explore deep-water areas.

On the surface, the ship will also have a large pitch where researchers will be able to go out into the fresh air during the break and enjoy the view. The landing area of the helicopter will also be installed on the front side.

In addition to its scientific research purpose, the ship will also combine the elements of an expedition and the functions of a luxury-class liner. The ship will run on a "liquid-salt atomic reactor," which will have a cooling system inside and will not pollute the environment with smoke and waste.

A "liquid salt reactor" is an atomic engine that uses nuclear reactions to generate energy. Thorium, a low-radioactive substance, and its isotopes will be used as fuel in the "liquid salt reactor" on Earth 300. At the UN International Maritime Organization's request, ships must reduce total emissions by 50% from 2008 to 2050, which is, in fact, equivalent to a 90% reduction in emissions by that time.

"The 'liquid salt reactor' could therefore be the beginning of a new atomic age, as it would have no emissions and would not pollute the environment, which is very important in today's ecology," a representative of the company Core Power, which is working with Bill Gates to build a new generation of nuclear reactors stated.