Up to 2 000 polyethylene bags found in camel's stomach 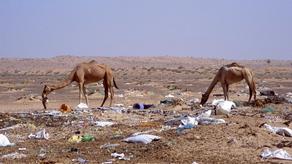 A team of researchers has discovered amazing things in Dubai. They found up to 2 000 bags of polyethylene in the camel's stomach. Scientists have also studied the bodies of more than 300 dead camels fed from the landfill. It was found that a large number of polyethylene bags trapped in the stomach lead to intestinal bleeding, dehydration, constant starvation, and eventual death of the animal, Futurism reports.

Marcus Eriksen, the director of research and co-founder of 5 Gyres, the world's leading plastic pollution reduction organization, says camel death is a whole new level of human irresponsibility. He said the deaths of camels caused by feeding at the landfill are only a tiny part of the risk animals face from plastic contamination.

"Imagine having 50 bags of polyethylene in your stomach that you can't recycle. They cause sores, severe discomfort, and the feeling of being constantly full. After that, you can no longer eat normally. This is what happens to camels, which causes them to die," said Ericksen.

He said plastic pollutes almost every region of the world, from mountain peaks to land, including the seas and oceans, and people are not aware of this problem.

Ericksen is urging world leaders, including the Biden administration, to support the UN Convention on Polythene Pollution. The contract will stop the production of harmful plastics and replace them with environmentally safe materials.

Specialists compare plastic contamination to the pandemic, although they say it is a problem that we cannot solve by creating a vaccine.