Why do gorillas beat their chests? 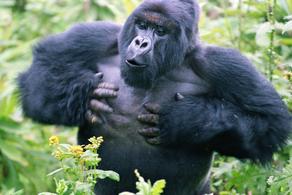 The gesture of gorillas beating their chest is one of the most impressive images in the animal world. Until now, it was not known why they behaved this way. To find this out, scientists observed gorillas at Dian Fossey Gorilla Fund in Volcanoes National Park, Rwanda. Studies have shown that gorillas give signals about their body size, which is an indicator of their competitiveness, EureKAlert reports.

They usually stand on two legs and quickly beat their chests. That is when unique sounds are produced, which can be heard from quite a distance. Scientists recorded these sounds and processed them. As a result, it was found that the peak frequency of shocks generated on the chest of larger gorillas is lower compared to smaller gorillas. By doing this, gorillas inform each other about the size of their bodies.

"We were able to show that body size is encoded in chest sounds," said Edward Wright, the first author of the study from the Max Planck Institute for Evolutionary Anthropology. Studies have shown that larger gorillas are socially superior to smaller gorillas and are more successful for breeding.

In the animal kingdom, the body size is often crucial as it is reflected in their fighting qualities for survival and competition with each other. Gorillas inform each other about their abilities, which determines their future in fighting and choosing a potential partner.