120 MP registered for the intersession meeting 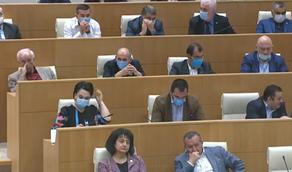 One hundred and twenty parliament members are registered for the intersession meeting to vote for constitutional changes after the first listening today.

Parliament Chairman, Archil Talakvadze, addressed the members at the session’s opening. According to the agreed changes, the 2020 parliamentary election will be held in a mixed system 120/30 and a 1% barrier.

Salome Samadashvili declared that the National Movement would not participate in voting.

As for the European Georgia Party, they will support the change on the first listening; after that, they will demand fulfillment of the last part of the agreement by releasing Giorgi Rurua from prison.

The project includes the so-called 40% locking mechanism, which means that the parties which gain less than 40.54% of votes will have no right to compile the government independently.