2 people detained at rally near Government building in Adjara 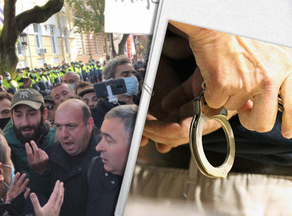 Two people have been detained near the Government House of Adjara.

According to the head of the Adjara Police Department, Konstantine Ananiashvili, the mentioned citizens were detained on charges of resisting a police officer and disobeying a lawful request, as well as petty hooliganism.

After the incident, opposition leaders and their supporters continued to protest with trumpets. According to them, they are holding a peaceful rally and are demanding a meeting with Tornike Rizhvadze.

According to them, there is a severe social background in the region, and the chairperson of the government is unable to carry out his duties.

The demonstrators near the Government House of Adjara today, like yesterday, delivered helium balloons with the inscription: "Tornike, come out to people" "Tornike slave." The rally was held in parallel with the government session.