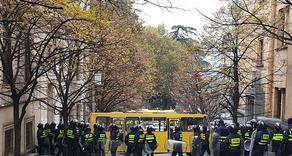 According to the Ministry of Internal Affairs, 28 people were arrested at the rally outside the Parliament.

According to the statement released by the Ministry of Internal Affairs, the Patrol Police and local authorities warned the rally organizers and participants giving them a reasonable deadline to free artificially created barriers at the entrance of the Parliament and the road.

"The rally went beyond the law on freedom of assembly and expression, it violated the law, which prohibits the blocking of entrances to the legislature, as well as blocking the road if the number of demonstrators isn’t the reason", reads the statement.

As a result of measures taken by police the entrances to the Parliament building are released.

The police urge all citizens to obey the law.

The Ministry of Internal Affairs will respond appropriately to each and every case of violation.

During the rally in front of the Parliament building, 28 persons were arrested for violations envisaged by Articles 173 (disobedience of law enforcement officers) and 166 (petty hooliganism).

According to the Ministry of Internal Affairs, 3 citizens received various injuries. They were provided with appropriate assistance in medical facilities.