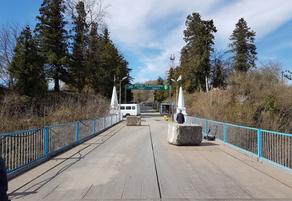 According to the citizens of Abkhazeti, Sokhumi has imposed the fee for crossing Enguri Bridge.Until now anyone could cross the so called “border” except 18–60 year-old men for which a special document possession was required.Now crossing the Bridge costs 50 GEL for everyone.The information is spread by DF watch.

“The only reason of it is gaining money.There is no other logical reason.It is difficult to pay such fee daily but there is no choice.They will demand payment until their pockets are full”, says one of the locals.

The locals also mentioned that they use the bridge only to sell nuts and other trading goods.

De-facto government of Abkhazeti closed the “border” on July 27 reasoning the anti-occupation protests that took place in Georgia.Later, crossing the “border” was allowed to everyone except 18-60-year old men.