According to Kobakhidze, Gakharia demanded money from "Georgian Dream"

According to Kobakhidze, Gakharia demanded money from "Georgian Dream" 1 September, 2021  20:53 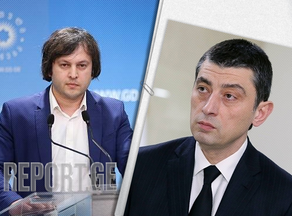 According to Kobakhidze, a meeting took place between Kakha Kaladze and Giorgi Gakharia.

"There was an attempt to communicate through a mediator on the financial issue; there was talk that if there were financial assistance from us, he would not put up his candidacy, to which he received an appropriate response. He probably got us confused with Kezerashvili.

After that, there were calls, and he asked for a meeting. Today a meeting took place between Kakhi Kaladze and Gakharia, where he told Kakhi Kaladze that he was going to nominate a candidate, to which he received an answer from Kaladze that it was not interesting for him," said Irakli Kobakhidze.

"I do not have much interest in what they are saying," said Giorgi Gakharia.