Agreement signed between Georgia and Ukraine 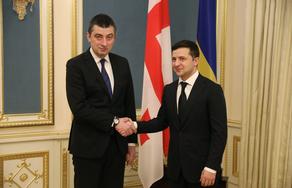 Giorgi Gakharia, the Prime Minister of Georgia, met with Volodymyr Zelensky, the President of Ukraine.

In the face-to-face meeting, the leaders discussed the common European perspective and the challenges associated with territorial integrity. The friendly relations between the Georgian and Ukrainian people were emphasized, that should bring specific results for both countries.

Giorgi Gakharia, the Prime Minister of Georgia and Volodymyr Zelensky, the President of Ukraine, spoke about deepening future cooperation focused on overcoming security challenges and on the success of the two countries regarding Euro-Atlantic integration.

Afterward, an expanded format meeting was held at the Presidential Administration. Davit Zalkaliani, the Minister of Foreign Affairs of Georgia and Irakli Chikovani, Prime Minister's Advisor on International Affairs, attended the event.

After the meeting, Gakharia and Zelensky signed an agreement on the establishment of a high-level strategic council for Georgia and Ukraine. The activities of the Council include four main areas - political, trade-economic, defense-security and cultural-humanitarian. Each direction will be led by the relevant ministers, ensuring a high level of bilateral dialogue.

The leaders of the two countries noted that the signing of an agreement means the readiness of the two states to move relations to a higher level.