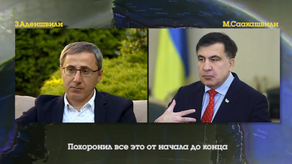 "Gvaramia is mad and sick, he ruined everything," Mikheil Saakashvili said in an audio recording.

The Ukrainian website obozrevatel.com writes about the audio recording: "Did Mikheil Saakashvili know about the planned murder of Giorgi Gabunia?! It turns out he knew! The recording of the telephone conversation confirms that Mikheil Saakashvili, as well as Nika Gvaramia, knew about the planned murder of journalist Giorgi Gabunia but did not inform Georgian government and for a long time they were covering up the one who planned crime, organized it and was about to fulfill it."