Ambassador of Georgia returns to Ukraine 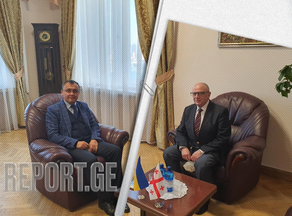 Ambassador Extraordinary and Plenipotentiary of Georgia to Ukraine Teimuraz Sharashenidze returned to Kyiv on April 21 and is fulfilling his duties, the Ministry of Foreign Affairs informs report.ge.

"At the meetings, the Ukrainian side welcomed the decision of Tbilisi to return the ambassador and positively assessed the move, especially in the light of the military escalation along the Ukrainian border and temporarily occupied territories.

The active dynamics of Georgia-Ukraine relations were noted at the meetings.

On behalf of the country, the Ambassador of Georgia expressed solidarity and support to Ukraine and the Ukrainian people.

The parties expressed readiness to actively cooperate in further deepening the strategic partnership between Georgia and Ukraine," the statement said.