Azerbaijan Georgia's one of major strategic partners, according to Gharibashvili

Azerbaijan Georgia's one of major strategic partners, according to 29 September, 2021  18:58 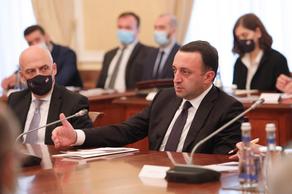 ''It is a great honor for me to be in Baku,'' Georgian Prime Minister Irakli Gharibashvili said at the Georgia-Azerbaijan Intergovernmental Economic Commission meeting led by Georgian and Azerbaijani prime ministers.

Gharibashvili said in his speech that the commission session had not been held for ten years for a number of reasons, and he is glad that it was held eventually. He stressed that Azerbaijan is not Georgia's neighbor and friend only, but it is also one of the major strategic partners of the country.

''Azerbaijan is one of the major strategic partners of Georgia and the country's main economic partner. We immensely appreciate our bilateral relations, which are expanding in the trade and economic sectors. Azerbaijan has been our major investor for a few years now. Today, I had the opportunity to meet President Ilham Aliyev, and our talks were extremely productive. We discussed, among other things, the issues of economic cooperation and stressed that these relations must be further strengthened and our trade turnover doubled. An incredibly good relationship links us not only in the trade and economic sectors but also in all other fields,'' Gharibashvili said, adding that Azerbaijan has provided Georgia with invaluable assistance during the global pandemic. ''I wish to thank you publicly for this,'' he added.