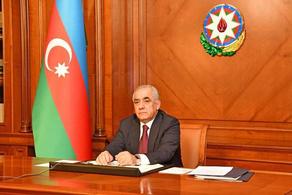 Azerbaijani Prime Minister Ali Asadov has congratulated Irakli Gharibashvili on the appointment to the post of prime minister.

According to the Administration of the Government of Georgia, the prime ministers had a telephone conversation.

"Ali Asadov wished the Georgian prime minister all the success in his activities and invited him to Azerbaijan within the framework of an official visit. The parties expressed hope that their good neighborly relations would be strengthened in all fields," the statement reads.