Bidzina Ivanishvili: I believe everything will be fine 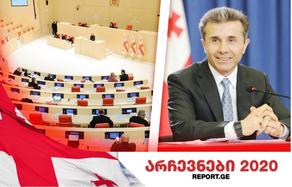 “The democratic community emphasized that the elections were held in a competitive and free environment,” Bidzina Ivanishvili, head of the ruling Georgian Dream party, said after he voted as part of the second round of the parliamentary election.

“First, I want to thank the Georgian people for the high civil responsibility they showed on October 31 and today. As you know, the coronavirus is raging now, and the Georgian society has shown maximum mobilization, for which I thank you again.

I want to remind you that the democratic community emphasized the elections were held in a competitive and free environment.

As a result, we received a representation of nine parties in parliament, which should be welcomed. At the same time, some political parties overly emotionally and ambitiously show their position. I think that common sense will prevail, and we will get a parliament with a multi-party representation. I believe everything will be fine,” Bidzina Ivanishvili said.