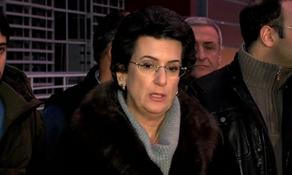 The Leader of Democratic Movement, Nino Burjanadze, returned from her trip to Moscow. When talking with journalists, she stated that she had discussed Vazha Gaprindashvili’s issue during the meetings in Moscow.

“I was starting absolutely all meetings with the issue of Vazha Gaprindashvili. I can state without a doubt that the problem was met with human sympathy from the very serious persons.

Besides the above, the Russian politicians are very clear about not only the human but of the political importance of the issue as well. I asked the Russian side to apply maximum effort for Vazha Gaprindashvili to be released back to his home, his family. I have got the promises that maximum will be done to support his release”, - said Burjanadze.

She refused to name the dates consequent from the interest of the case.