Chairperson of Georgian Parliament meets Sec-Gen of Community of Democracies 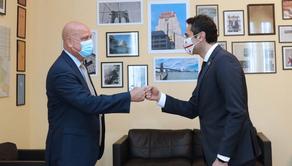 Chairperson of the Georgian parliament Kakha Kuchava has met with Secretary-General of the Community of Democracies Tomas Garret.

At the meeting, they focused on activities by the Georgia-led working group of the Coalition called Democracy and Technology.

They stressed the significance of introducing modern technology in the elections and laid emphasis on innovations planned to be implemented within the election reform.

Mr. Kuchava and Mr. Garret also discussed the issue of refining information-technology infrastructure in the parliament.

At the end of the meeting, the Sec-Gen noted that Georgia sharing its experience with other countries would prove useful for them.