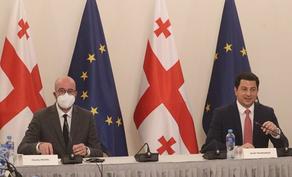 European Council President Charles Michel's meeting with Georgian politicians having signed his agreement is in progress in the Parliament of Georgia.

In addition to Chairman of the Parliament of Georgia Archil Talakvadze and the representatives of the ruling party, oppositionists such as More Freedom-Girchi political party leader Zurab Japaridze, Lelo for Georgia leaders Mamuka Khazaradze and Badri Japaridze, Strategy Aghmashenebeli party head Giorgi Vashadze, and others are present at the meeting.

Some political parties signed the agreement at Orbeliani palace on 19 April, while others did so today.