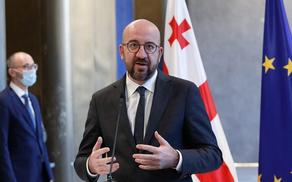 European Council President Charles Michel is arriving in Georgia today. He remotely attended the event at which the representatives of Georgia's ruling and opposition parties signed the agreement.

Charles Michel said at the event that he plans to visit Georgia to discuss the steps to be taken to strengthen the relationship between Georgia and the European Council.

In her statement which preceded that of Mr. Michel's, Georgian President Salome Zurabishvili said that after the agreement is signed, they must ramp up efforts to ensure Georgia's integration in the European Union. For this purpose, Mrs. Zurabishvili invited Charles Michel to Georgia.

Zurabishvili thanked Michel for considering Georgia an important partner. In her words, a tremendous step has been taken toward depolarization, which is critical, but, as she said, yet another step must be taken through joint efforts. According to the president, the agreement must prove the prerequisite ensuring Georgia's rapid integration. ''Hopefully, we will start working on this. I would like this work to start as soon as possible, take tomorrow, with your visit,'' the president said at yesterday's event.

The European Council President will pay his second visit to Georgia.

Representatives of political parties have signed the agreement in Orbeliani palace.