Compromise is out of question - Majority session ended in Parliament 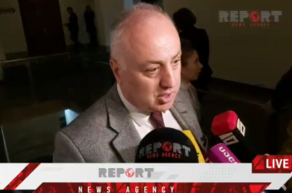 Closed session of Majority is over in the Parliament. According to lawmakers, they have discussed all the major issues, including rallies that have been going on for several weeks demanding a proportional electoral system. Dimitri Khundadze, the Majoritarian Deputy made comments after the session, according to him “compromise is out of the question". According to him, there are only 20 people in the street who are family members of opposition party leaders.