Congressman Devin Nunes: US interested in close cooperation with Georgia

Congressman Devin Nunes: US interested in close cooperation with 5 February, 2020  12:39 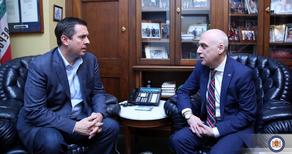 According to the Republican Congressman Devin Nunes, Georgia is making a significant contribution to Euro-Atlantic security, and the United States is interested in continuing working with the Georgian government in parallel with the country's economic growth and further development of relations.

According to the press office of the Ministry of Foreign Affairs, the congressman made the statement at a meeting with Davit Zalkaliani.

"The Trump administration and the Republicans in Congress want NATO to strengthen and be secured, and be able to help countries like Georgia. Georgia is making great efforts in the fight against terrorism in Afghanistan," the congressman said.

The sides discussed the strategic partnership between Georgia and the United States, successes of Georgia's European integration and plans, as well as the critical role of the United States in achieving Euro-Atlantic goals. Besides, the discussion focused on the security environment in the region and Georgia's peace policy.