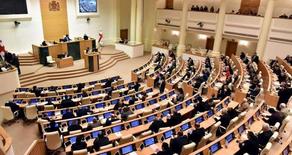 On June 23, the Parliament of Georgia voted in the second hearing on the constitutional amendments. The project was supported by 115 deputies, with three against.